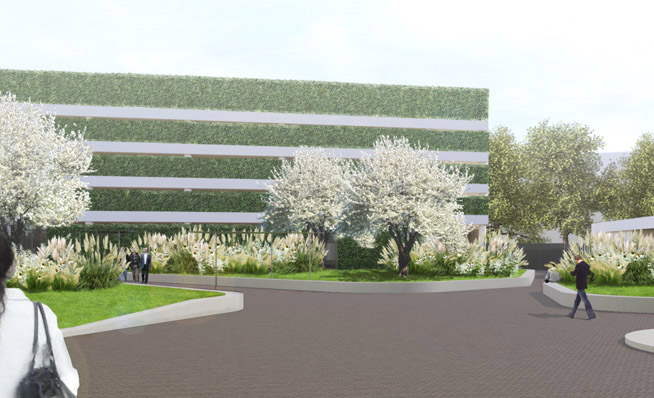 Right across the new Rotterdam Central Station, at the most prominent location of the Central District, FIRST Rotterdam marks the entrance to the city. The 130 meter high tower of FIRST is the new highlight in the Rotterdam skyline. FIRST Rotterdam is part of the redevelopment of the Weenapoint. In addition to the construction of the project FIRST Rotterdam, the existing Weenapoint tower is substantially renovated. The Dome building, a national monument, will get more space and is soon situated in a green city oasis. The existing car park building will also be renovated and will get green facades. The Dome Building and parking garage are located in the garden. Motorists drive through the garden to the garage and visitors walk from the garage to the offices of First. The design for the garden does not distinguish pedestrian and car accessible areas, the garden exudes an overall atmosphere. Paths and roads are carried out in a baked clinker, planters and grass surfaces are elevated, thus sitting edges occur. The planters are planted with white flowering plants combined with various ornamental grasses. The planting is attractive in all seasons. The city oasis is accessible during daytime. 13-03-2015