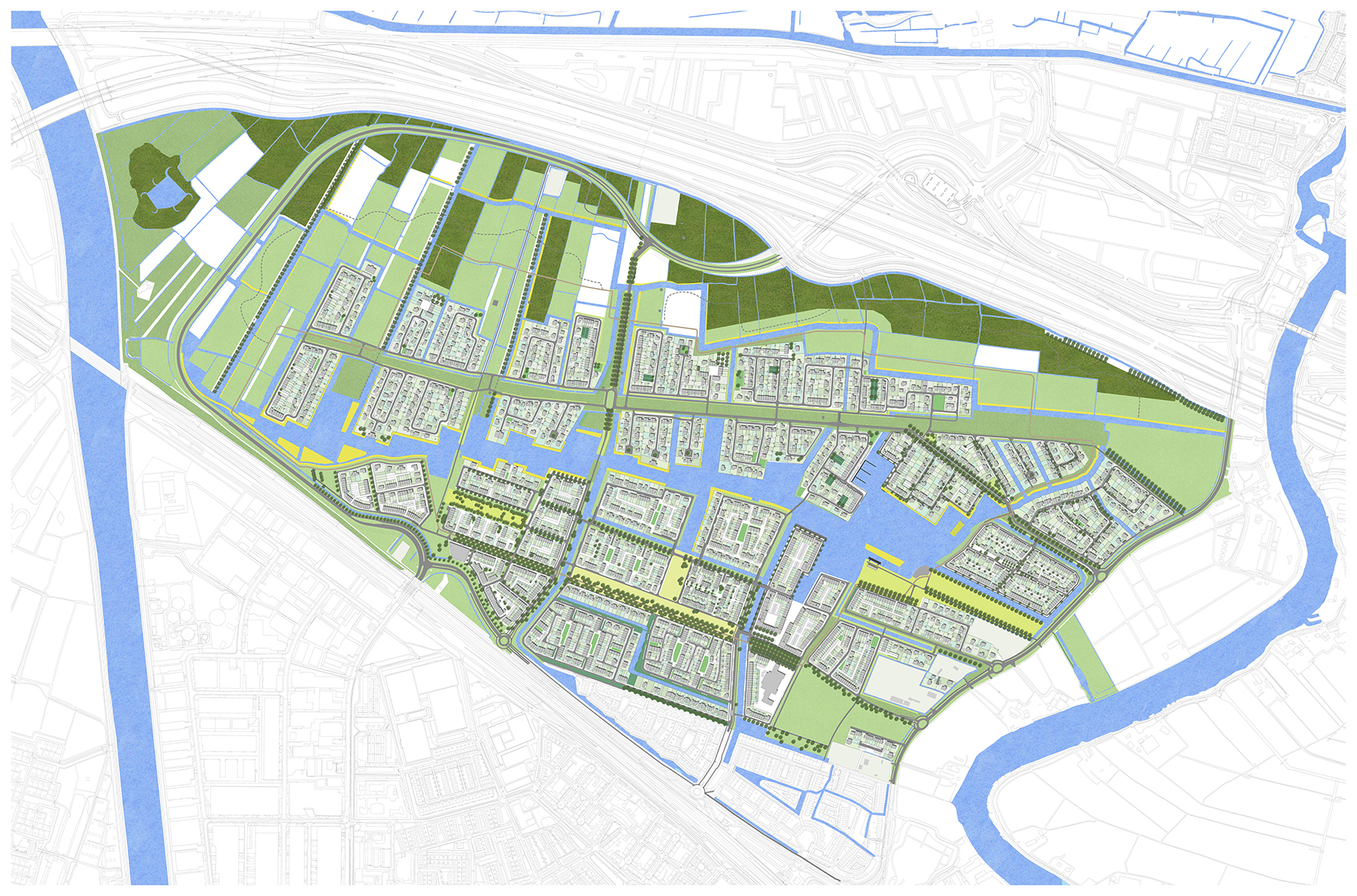 Weespersluis is a new residential area between Weesp and Muiden in the former Bloemendalerpolder. The development of Weespersluis covers an area of more than three hundred hectares, one third of which will be built on with approximately three thousand homes. The remaining space will be developed as a nature reserve with the water of the Gouw in the center. Weespersluis is divided into three different sub-plans: Lanenrijk, Vechtrijk and Waterrijk, each with its own theme and spatial interpretation. Atelier LOOSvanVLIET is working on the urban plan for approximately fifteen hundred homes in the subareas Vechtrijk and Waterrijk. We are also working on the elaboration of the public space for these sub areas: Park at the Muiderslotlaan, the Gouwpark and the designs for all bridges.
Vechtrijk
The urban plan for Vechtrijk refers to the traditional historic towns along the Vecht. The plan is based on the architecture from the 17th century when the Dutch slowly became wealthy because of their trade with the far East. The new wealth resulted in an individualism in construction. After all, citizens wanted to distinguish themselves when building their houses. This principle of individualism was continued in our sub-plan of Vechtrijk. The dwellings differ from facade and type of brick. Some have a longitudinal roof with a roofchapel, others have a stepped gable or a saddle roof. The building blocks are closed. The residents live along quays and formal inner streets.
Waterrijk
The neighbourhood Waterrijk is based on living close to the nature reserve that is being developed around the residential area. The district has a much more open character than Vechtrijk. It opens up along a ribbon that was originally a waterway. In our plan the ribbon is a paved road. From this concentration of buildings the allotment fans out. Waterrijk has a rural architecture with many semi-detached and detached houses.
The urban plan of Waterrijk refers to elements that occur frequently in this area. In particular, the many country houses and farmyards along the river Vecht return as special elements in the allotment. In general, the country houses are situated on the waterfront. The farmyards are situated on the newly developed nature reserve. Also a small harbour is made in the parcelling with similar architectural principles as can be found in Vechtrijk.
Lanenrijk
Lanenrijk is built in the architectural style 'Fin de Siécle'. The streets are green with avenues and canals. The urban plan of Lanenrijk was developed by Mulleners and Mulleners Architecten.